I knew the service was going to be different before I even arrived. This was, after all the funeral for my my dear friend’s mother…just 15 months after my own mother’s passing. I wasn’t confident I would even be able to make it through. But, I had to make it through…for him.

One by one family members and friends made their way to the front of the church. As they spoke a picture was painted, a picture of a mother, a friend, a teacher, a devoted parishioner. There was the daughter who spoke of a mother who taught her what it means to be a lady; the son who read the story of his mother’s life in her own words from a letter discovered among her belongings; the lifelong friend who spoke of schoolmates who had been best friends and co-workers for a lifetime. And then…and then there was my friend. 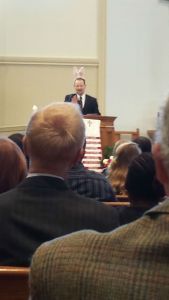 “OK, everyone we are going to play a game! Everyone has to listen, and there are going to be rules!,” he shouted as he approached the microphone…wearing pink rabbit ears. He then told the story of the infamous “Cuffel Easter Egg Hunt”. He started by asking who had even heard of the Egg Hunt. Of the 90+ people there, most everyone raised their hand. “Who has participated in the Easter Egg Hunt?” Very few hands were lowered.

He went on to explain the rules of the Hunt. There were 92 eggs hidden (90 this year and 2 left over from last year that were never found). Inside each egg was, not candy, but a number. After all the eggs had been found, his mom would call out numbers.

This would continue until all 92 numbers had been called. Prizes ranged from 5 cents to twenty dollars to a “Happy Easter” greeting.

“Ok,” my friend continued, “when you came in you were given an egg. Everyone stand up and open your egg. Ok, if you have numbers 1 – 3, sit down and have a Happy Easter. If you have 5 – 39, sit down and…Happy Easter.” He continued until three people remained standing. “Who has number 40 (her year of birth)? You get five dollars.” He walked out into the church and handed the woman a five dollar bill. “Who has number 74 (her age at death)?” You get ten dollars.” Finally, “who has number 4 (her treasured grandchildren)? You get $20.”

He then went on to talk of his mother. The lessons he learned from her, her love of games. He talked of her spirituality, her unconditional love,  her compassion for others, her selflessness. As I sat there, I realized I knew more about my friend’s family than I thought.

Mrs. Cuffel, I never knew you, we never met. I have known your son for over twenty years. After having attended the celebration of your life,  after hearing the stories, sharing in the laughs, the smiles and the tears, I realized, through your son, I DO know you. You raised a wonderful family. You raised a wonderful man. Spiritual, compassionate, a great friend. You should be proud.

Dennis, I love you brother. Have a Happy Easter!

Expanding your circles on Google+?

Read more of my musings on LinkedIn.

Interested in IT and the CIO Role? Check out my series “The CIO is Dead! Long live the CIO” on Intel’s IT Peer Network.

The Land of Serendip – The Final Chapter

A Story Across Generations

I Saw My Father…

Wow, are those smiles identical, or what?!
9 replies

Rivers of Thought: 2014 in review
Scroll to top