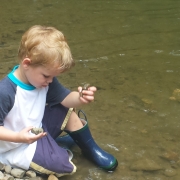 The week started much like many others, Monday morning and off to work. Pretty typical Monday, One on One’s with my staff in the morning, followed by an afternoon full of meetings. That evening, while sitting in my office at home catching up on email, my cell phone rang. It was a number I did not recognize. So, I did what I always do with a number I do not recognize, I ignored it and let it roll to voicemail. Before I had a chance to listen to the message, it rang again, this time it was my dad’s number.

I answered, fully expecting to be talking to my dad…except I wasn’t. It was one of the nurses from the retirement community where dad lives. Dad had fallen several times and was very disoriented. She was calling an ambulance. I dropped everything and rushed to his condo. As I arrived, they were loading him into the ambulance. One of the firemen gave me the low down on his condition, I asked them to tell him I was here and I would see him at the hospital. After speaking with the nurse and the neighbors who had called her, I followed the ambulance to the ER.

Hours later, after myriad of tests, we learned that dad had experienced a transient ischemic attack (TIA) or “mini-stroke” and was also suffering from pneumonia in both lungs. They started a series of IVs and admitted him into the hospital. (For those that know Dad, he has improved and is now back in his duplex.) As for me, I stayed with him until he was in his room for the night. I think my head hit my pillow about 2 AM.

I was up and off for a 7:30 meeting the next morning. The rest of the week was a blur. Carmen and I would tag team. She would spend hours at the hospital during the day, texting me with updates. We would talk by cell in between meetings, then meet at the hospital as soon as I could get out of the office. We would spend the evenings with dad and then head for home, stopping for dinner on the way. Most nights it was 9 or 10 before we arrived home.

Dad was improving, albeit, slowly. By Friday, we were exhausted. As we talked mid-afternoon, we decided Carmen would head for home, and I would stop in and visit with dad before I headed home. As was typical, dad would be awake and talking one minute and fast asleep the next. During one of his “naps”, I was checking Facebook. There it was, a post from my son Jeremy. A short video of my grandson, Braxton, uttering his first words. “Momma”, “Dadda”, “Bye-bye”. Not wanting to disturb dad, I texted Carmen and my heart beating like a drum…”OMG, have you seen Facebook?”

First words are always a big deal. These first words, however, had been a long time coming. You see, Braxton is 3 ½ and has been diagnosed with autism. His language skills and socialization have been particularly slow to develop. He had not spoken a word, not even close.

Carmen was not responding to my text, nor was she “liking” on the Facebook post,  could barely contain my excitement, I wanted to share the news! Finally, dad woke up and I called Carmen to share the news, then showed the video to dad. By now, all three of us were in tears.

The next morning when Carmen and I went over to Jeremy’s house to visit with him and Braxton, all I could do is grab Jeremy by the shoulders and look him in the eyes and say, “Oh, my God! Oh, my God, Oh, my God!!!”

After the week we had had, I can’t think of a better way to end it. Dear, sweet, beautiful Braxton speaking his first words.

“Momma”, “Dadda”, “Bye-bye”…the sweetest sounds I had ever heard!

The Traffic Stop – by Kenn Beckwith
Scroll to top