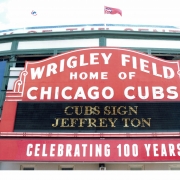 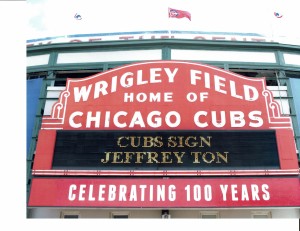 July 9, 2014. My day as a Chicago Cub. Yes, two years ago…and I am just now writing about it. Proving once again, I am not above jumping on a bandwagon or leveraging current events to get a few more views on my blog! But, yes, July 9, 2014, the day I became a Chicago Cub and a fan forever.

I almost didn’t go. When the opportunity presented itself, I almost didn’t go. I was too busy. Couldn’t take the time off work. I stopped following baseball in a decade that started with a “7”. Was never really a Cubs fan, Tigers, yes (thanks to the Honorable Jeff Edens), Reds, absolutely, the Big Red Machine, but those lovable losers from Chicago, not really.

But there I was, on a bus with 59 other middle-aged wanna-be players, riding across Chicago to the hallowed grounds of Wrigley Field. I was doing this for the history of it, I told myself. I love old ballparks, Fenway, Yankee, Wrigley. The magnitude of the stories inside those confines is overwhelming. All that was about to change as we pulled up at 1060 W. Addison, home of the Chicago Cubs (and Elwood Blues).

As we filed off the bus, signed our waivers (hey, playing baseball is a dangerous activity), and made our way through the concourse to the United Club, no one spoke. I think we were all listening to 100 years of voices. Most of us had been here before. We’d all taken in a game. But now, instead of the elbow to elbow crowds, the place was virtually empty. The sights and sounds of gameday after gameday echoed through the concrete and steel pillars.

After gathering in the United Club and hearing our final instructions, we were escorted to the locker room. There we found full uniforms, complete with our name on the back and our chosen number. I had chosen the number 7, in honor of Rick Monday. Monday spent 19 years in the majors, four of which were with the Cubs. He was best known for stopping a fan from burning the American Flag in centerfield of Dodger Stadium during the Bicentennial.

I think it was that moment. The moment I put on the jersey and the pants, the moment I put on the cap. At that moment, I became a Chicago Cubs fan. When we were dressed, we wound our way through the back hallways to the press room. It was time to sign my contract and be interviewed by the press. Flashbulbs popped, dozens of reporters clamored for a word, just a soundbite. “Ton, how does it feel to be a Chicago Cub?” My name lit up the marquee outside the park. “I’m honored to play with such a great group of guys, in such a great city, with such tremendous fans. We ARE going to bring a pennant to this city!”, I said confidently, trying to use every baseball cliche in one sentence. 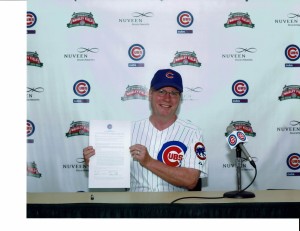 After the interview, I again wound my way through the back halls under the stands, past the urinal, to the…what? The urinal? Yup, the urinal! Who knew, just a few feet from the dugout, just around a corner to protect it from view was a urinal. Guess, when you gotta go, you gotta go, no time to go all the way to the locker room. Didn’t your mother tell you to go BEFORE the game? (Ok, there is a story here of a small Little Leaguer, standing in right field, dare I say, dancing in right field. Coach wouldn’t let him go to the restroom. Dark spot in those baseball pants growing larger and larger by the pitch. Don’t know who that kid was, but my mom loved to tell that story.) Anyway, I digress, I proceeded past the urinal and into the dugout.

Moments later, I climbed the three steps and stepped out onto Wrigley Field. Holy crap! I was standing on Wrigley Field, in a full Cubs uniform. Yes, the stands were empty, but the scoreboard was lit up, the flag was flying, it was GAMEDAY. We began to loosen up in the outfield by playing catch. Soon, we were joined by the training staff of the Cubs. They led us in some calisthenics. Let me tell you this…my muscles have not moved in those directions in many, many years!

After nearly killing us with stretching, we divided into three groups and worked our way through three pre-game stations. First there was the batting cage at home plate. Our hitting coach, Billy Williams, worked to perfect our swings. Did you hear that? Our hitting coach, Hall of Famer, Billy freakin’ Williams! We each got several rips (see, I am already talking like a big leaguer) at the ball. No, the rumors are not true, I did not hit it out of the park, but I did hit it out of the infield!

Our next stop was the batting cage under the right field stands. Who knew THAT was there! Here we had more time to practice our homerun swing!

The final stop, was in centerfield. Ferguson Jenkins (uh, yes, THAT Ferguson Jenkins) was there to coach us on the art of running down fly balls and (hopefully) catching them. I was stunned at how high a high fly ball actually flew! By the time, it drops from its apex, it is screaming down at you! For the record, yes, I did catch them!

While we were warming up, fans began to stream into the ballpark. Well, I guess it was more like a trickle. Each player was allowed to invite a handful of friends and family to watch to fierce competition. My fan club consisted of my wife Carmen, and our friend Nick Mackovich (though I think he was really there for the free beer and hot dogs!).

Soon the booming, slurring voice of Harry Caray came blared on the public address system. Ok, it wasn’t REALLY Harry Caray, but it was a GREAT impersonator, complete with a case of beer. The lineups were announced, all four teams lining the first and third baselines for the National Anthem. What an awesome moment!

In my first at-bat, I lined the first pitch over the shortstop’s outstretched glove for a single. As I dashed down the first baseline (I have very deceptive speed…I am much slower than I look), I felt it. That nerve shattering, tear inducing, flash of pain that comes when you pull a hamstring. (I should mention here that my stellar softball career came to an end about a decade before with not one, but two torn hamstrings). Not wanting my day to end so quickly, I decide to “man up” and play through the pain. I think Carmen and Nick were the only ones that knew something was wrong.

I took my lead off of first and prayed the next three batters would strikeout to end the inning so I would not have to run. But, the baseball gods would have none of that! Crack, the very next pitch was lined to right field. I barely made it to second in front of the throw. My right leg now screaming at me to stop, but I wouldn’t listen. With the crack of the bat I was off to third. As I stood on third, Billy Williams (yes, the Hall of Famer Billy Williams) our Third Base Coach, yells out, “Hey, Number 7, you ignore your base coaches or what?” Uh, evidently, he had been waving me home the entire time I ran from second to third. I could only muster a “no wheels, Billy, no wheels” and continue to grit my teeth.

Our next batter ripped a double and I easily trotted home. Single, run scored, pulled hamstring…great first at bat, but it was cool to see my batting average the next time up as 1.000. My team ended up winning the game and moving on to the championship. I honestly don’t remember now if we won that game or not. Must have been the pain in my leg…or maybe it was the free beer! I ended up 3 for 5 on the day, .600, I think I will call it a career!

After the games, the fans left the park and we returned to the locker room to change before dinner in the United Club. There were notes in our lockers. The uniforms were ours to keep, courtesy of the sponsors and the Chicago Cubs. At dinner, they played a video montage of our outstanding day. As we left to board the buses, they handed us a framed picture of our contract signing and a Louisville Slugger autographed with our own names!

Field of Dreams? Yes, absolutely! Unforgettable day? Without a doubt! Fan of the Chicago Cubs? An emphatic, of course! So, yes. I am jumping on the bandwagon, I am rooting for the Cubbies to take it all. I will forever root for the Cubs and revere Wrigley Field…it’s actually in my contract!

It started with a whisper…
Scroll to top