Could This Be Your Father As Well?

I was scrolling through my LinkedIn newsfeed as I tend to do several times a day, when I saw a post.

A post I can’t get out of my mind. 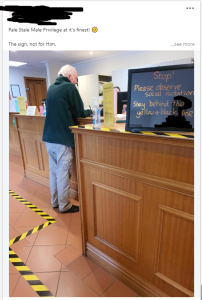 I’m not sure what caught my attention first, probably the image. But with a glance so quick, I didn’t comprehend the context – other than the man.

Then I saw the opening lines. 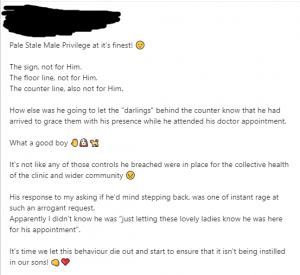 What followed can best be described as a snarky commentary on this man.

The comments that followed the post were 13 – 2 in the same tone. Because…

I looked back at the picture.

The Man, The Father

After all, he’d been in this office dozens of times before. He doesn’t see well – doesn’t pay attention to details. He probably never saw the tape on the floor. Same reason he lost his driver’s license a year or two before.

I saw my father.

The Dementia, The Father

And his comments to the staff behind the counter? Calling them “darlings” and “lovely ladies”?

There are many forms of dementia. Not everyone who has dementia has the memory problems of someone with Alzheimer’s.

This was the Reverend Doctor Ton. The pastor of pastors. The leader of leaders.

This was the man who was a champion of the civil rights movement in the 60’s and 70’s. He was the man who stood up for the rights of the LBGTQ community in our churches.

My father was the man who hired the first female executive minister in the entire denomination, who first put women on equal footing in church leadership, who promoted women in the ministry every chance he had.

And yes, this was the man, who at the end of his life, flirted inappropriately with waitresses, nurses, friends and acquaintances.

Because bvFTD is a type of dementia that attacks the brain in such a way as to make you lose cognitive ability.

The Fear, The Father

At the end, my father had the cognitive ability of a five-year-old.

His social filters were basically gone.

Can you imagine the fear felt as your world closes in around you? As your ability to make sense of things diminishes? You have the memories of an 87-year-old, but can’t comprehend the sign in front of you?

Even though I am an “old white guy”, I am a champion for diversity and inclusion.

I believe in speaking up.

We Are In This Together

I don’t know the man in the photo, nor do I know the poster, nor was I in the room during the exchange between them.

What I do know is that we are all in this COVID-19 reality together.

We need to show each other grace and not assume we know someone’s motivations, their attitude, their fears, or their confusion.

Let’s help each other – let’s support each other.

That man is probably someone’s father.

In a few years, that man could be me…or you.

Love is Thicker than Blood

Do This In Remembrance Of Me

The Soundtrack of Our Lives

A Story Across Generations