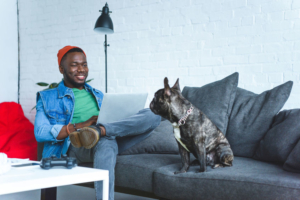 Is Culture tied to place or space?

It’s a question that I have asked myself many times over the last two months. The question was sparked during a virtual roundtable with a group of business leaders. Several of them expressed anxiously they could not wait to get back into the office, they couldn’t wait to get their staff back into the office. Why? Not because they missed everyone (though they did express that they did miss everyone), but, rather because their culture demanded it. Their culture was built on open collaboration, the buzz of activity, close interaction among team members.

It got me thinking…Is culture tied to place or space?

It’s been said that “culture eats strategy for breakfast” (actually, Peter Drucker is the one that said it). Without a doubt, your corporate culture can have a dramatic impact on the success or failure of your strategy and therefore your company. But what IS culture?

There are about as many definitions of company culture as there are people in the workplace. The definition I like the best is by Susan M. Heathfield, in her post: Culture: Your Environment for People at Work

“In many ways, culture is like personality. In a person, the personality is made up of the values, beliefs, underlying assumptions, interests, experiences, upbringing, and habits that create a person’s behavior.

Culture is made up of such traits shared by a group of people. Culture is the behavior that results when a group arrives at a set of generally unspoken and unwritten rules for working together.”

So, is culture tied to place or space? I believe if culture relies on all of your employees being in the same place and sharing the same place, you are doing it wrong. Can place and space impact company culture, absolutely! A few years ago, as a new CIO the first thing I did was replace all the workspaces for the IT team. It made a world of difference on the mental health of the team. Just recently, I was with a company who moved into brand new office space. I can tell you, it made a huge impact on my own mental health, outlook, and desire to be there. So, yes, place and space CAN influence culture, but it can’t (or shouldn’t) define culture.

So, how do we create and maintain a company culture that extends beyond the walls of our office?

Intentionality – Be intentional about including remote employees. This has been easier with everyone being remote, but as we return to the office, be intentional to include those who aren’t there. How many times have you been on a conference call, and forgot to tell those on the phone the meeting was over? It happens! But don’t let it! Make sure to include them in the pre-meeting chatter and the post-meeting debrief. Make sure to call on them. Be aware of time zones when scheduling meetings.

Technology – You might have guessed I would have technology in here somewhere. It is one thing I think we have all learned over the last two months. While video is not perfect, it does create a connection. I believe we have connected at a far more personal level virtually than we ever have face-to-face. We have been invited into each other’s homes. We have a window into each other’s lives…dogs, cats, kids, spouses. Far more personal than a picture of my grandkids on my desk is my grandson entering my office and saying “hi” to all the people on the video call.

Creativity – Be creative in including everyone. If your office is known for donut Friday…send donuts to those who aren’t there. If you are having an after work gathering (post physical distancing, of course), open up a video conference and let the virtual employees participate. If there is energy in the office, make sure the energy crosses through the connection.

There are numerous articles on workplace design and its impact on culture. Extend those design concepts to the remote worker. Do they have all of the equipment to do their jobs as if they were sitting in the office? The answer should be yes.

I would love to hear from you. What ideas do you have for extending culture beyond place and space? Send me your thoughts!

A Culture Plan – Are you planning to fail?
1 reply