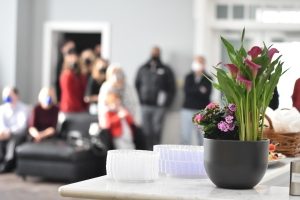 As we wrapped up the recording for the audiobook version of The Flames Shall Not Consume You, my mom’s book about tragically being trapped and burned in a fire and her journey to survival, my thoughts turned to the launch of these second editions. My original idea was to release them on September 5th in honor of mom’s birthday. It had become clear the ebook and the audiobook would not be ready at the same time. My Plan B was to release the ebook in September and the audiobook on January 4th, the anniversary of the fire itself.

Given it was August, I had time to plan a launch event around the audiobook. I immediately began to think in terms of making the event a fundraiser for Eskenazi Health’s Burn Center. This was the evolution of the Burn Center that had saved mom’s life in 1980. Since Amy and I had decided to donate the proceeds of the audiobook royalties to the Burn Center, it was only fitting to expand on that through the launch.

A conversation adds a great twist

Having hosted successful launch parties for my previous books, I had a pretty good idea of the steps needed. I started to gather estimates for a venue, catering, marketing, music…all the things that go into a good book launch event. Enter Amy Brown, you remember Amy, right? The CEO-turned-narrator of the book? 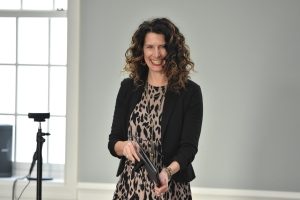 Amy had shared the story of the creation of the audiobook with her pastor, the pastor of the church my mom and dad had attended, and the church where I had met Amy. What if the church were to hold a launch event? Now THAT was an idea I had not considered. Mom would have loved it! Let’s do it! Amy also suggested that Jay Geshay would be interested in helping to coordinate the event. Jay is a lay leader at the church. I have known him almost as long as I have known Amy. Let’s do it! 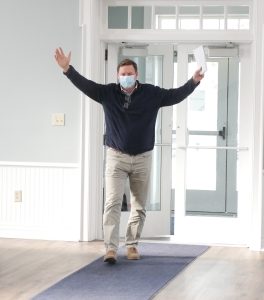 We began to make preliminary plans…first order of business…a date! On or about January 4th, the anniversary of the fire, perhaps we would need to slide it a few days because of the holiday. Plenty of time to plan. The recording was complete. As soon as I received the final audio files I could send them to Audible for production. “In 2020, every author was publishing a new book. It took them two months to produce my previous audiobook.” I warned Amy and Jay. “We won’t know the exact date for a while.”

Just like I dramatically underestimated the amount of time it would take to record the book, I dramatically underestimated the time it would take to produce the final audio files. September turned to October, October turned to November. At that point, I called Amy and Jay to say we needed to push the date, no way would it be ready by January 4th, not with the holidays.

I started receiving the files from Mitch, listening to every heart-wrenching second again. Some of the files had issues (hey, that’s why you review them!). Mitch turned those around quickly. However, it was now mid-December and the files were not yet in Audible’s hands. I sent Amy and Jay a note to suggest we meet the first week in January and see where we are in the process. On December 23rd, I submitted the files to Audible, now I could only wait.

On December 28th I received an email from Audible. The book was completed and was on sale! After all the amazing moments of the last year, I had blinked–I had doubted. The book would have been ready for a January 4th launch!

Instead, I decided to use January 4th to start the promotion of the audiobook on social media. Amy, Jay, and I agreed the event itself would be on February 3rd. 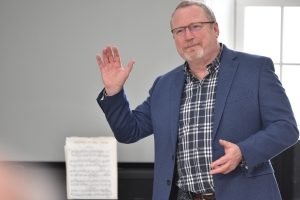 With the social media campaign announcing the release of the audiobook in full swing, the buzz around the book began to grow. Because Amy and I are both heavily involved in the tech community in Indiana, tech leaders from across the state began to comment on and share the posts. As people began to listen to the audiobook, they posted some incredible feedback.

I had the opportunity to read this book in December and was deeply moved by it. Highly recommended.

Powerful and exceptionally moving true story. Thrilled that Jeff decided to revive and share it with the world.

35 minutes into the book and I’m #spellbound! You were right Jeff Ton (he/him), I did need to bring tissues. Picture a grown man shedding tears on a treadmill listening to Amy bring your mom’s voice and story to life. The story and narration are as good as advertised! You can bet I’ll be listening on the way to the office and back, too. Bravo!!

I read A LOT of books. Most of them are good. Some great. Few make me put them down every few pages just to feel everything I’ve read and really take it in. (Oh…and cry in the middle of a Chipotle’s while reading. No shame in my game.) There are such an incredible series of steps here to bring all of this to life in the 21st century for us. Grateful for the Holy Spirit bringing your mom through everything to gift us with this book. And grateful to you for bringing it to life again.

🙏🏼🙌🏼🙏🏼🙌🏼 so excited to listen to the story be told after reading it! Congrats Jeff Ton (he/him) what a beautiful way to honor your mom and her story.

I finished this book in two days (on Audible) – INCREDIBLE story of facing unimaginable pain physically and emotionally and finding your way through with grace, dignity, grit, and faith. The book is inspiring and instructional in so many ways. I find myself thinking about the book and the author Mary Ellen Ton nearly every day. The book has helped me appreciate all that I have and the personal connection to Jeff Ton (he/him) and the narrator Amy Brown is just icing on the cake!

The plan comes together

While all this was going on Jay, Amy, and I met several times to discuss the event itself, both from a logistical perspective and from the program perspective. Amy’s parents, John and Carol Brown 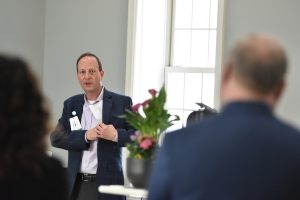 graciously agreed to arrange for catering and to cover the costs. Steven Potts, the Minister of Music of the church and pianist extraordinaire agreed to provide the music for the event. Jay would serve as the master of ceremonies. I would share some thoughts on the process of bringing the second edition to life. And, Amy would read some excerpts from the book.

As plans were coming together, I was able to connect with Bill Farkas, the VP of Major Gifts for the Eskenazi Health Foundation. Even though I warned him the proceeds probably would not amount to a “major gift” Bill was excited to attend and share some words about the Burn Center at the hospital.

We were all set…except…except for mother nature.

A major winter storm was forecasted to hit Indianapolis on February 2nd and 3rd. It was all over the news for days as January neared its close.

What about all of the invitations?

They could be wrong, they’ve forecasted huge amounts of snow before and we only received a dusting.

What if they were right?

No one would attend.

But, what if they were wrong?

But, what if they were right?

So, on February 1st with the temperature over 60 degrees, I made the decision to postpone. We decided to push it out two weeks to February 15th. Before I went on a walk in my shirt sleeves, I started posting about the change of date, sending countless personal re-invitations with the new date, and calling those I could call.

They were right. The ice started on February 2nd and the snow moved in on the morning of the 3rd. The snow gauge in our backyard registered 11 inches by the time the snow stopped. Planning was complete. The only thing to do now was to wait…oh and to shovel snow…lots of snow! 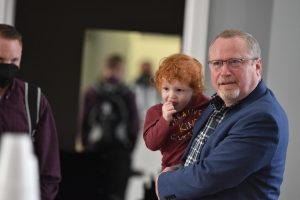 I wish I had the words – a funny thing for an author to say. The event was perfect. I lost track of the number of people who attended…old friends…new friends…business colleagues (who are also friends)…church members (many of them knew my mom)…family.

Steven’s music was the perfect backdrop to the conversations. We ran the program format three times over the two hours. Jay welcomed everyone, shared a personal reflection about mom or the book itself, and introduced Bill. Bill said a few words about Eskenazi. Jay then introduced me. I told a story or two about creating the second edition (most of which ended up in this blog series). I introduced Amy and she read a selection from the book. Jay would then lead a short Q&A session. Steven played during the breaks.

What a journey it had been…from Rebeca’s Facebook message in January of 2021 to the evening of February 15, 2022…a journey I will never forget. I know mom would have been thrilled to know her book hit number one on Amazon. She would have loved Amy’s reading of her words. She would be humbled by the number of attendees at the launch.

Mom, your flames burn brightly in all our lives.