The Flames Burn Brightly, a story I hinted at in some of my previous posts. This is the story of bringing the second edition of my mom’s book, The Flames Shall Not Consume You to life!

Since first writing about my mother’s passing in 2013, I occasionally hear from people whose lives she impacted. The notes come via comments here on Rivers of Thought, emails, or even Facebook Messenger. Most of them had never met my mother, yet her stories changed their lives in some way. Mom was an author. She was a speaker. Her words and her story were powerful.

Whenever anyone reaches out, I am moved. I want to learn more about the person. I love to know how mom or mom’s words moved them. Through my mom, my network has expanded to include some incredible people.

A year ago, I received a note from a young woman from Peru…the country, not the city in Indiana.

Hmmm, digital. To the best of my knowledge, mom’s books had never been released in ebook or audiobook format. Those mediums have been around much longer than you’d think, but in 1980 when mom’s books were published they were not mainstream. Where to start? I had no manuscript, I had no publishing rights.

I wrote to David C. Cook Publishing, the original publisher of mom’s books. Several weeks later I received a letter from their legal department. To paraphrase, it said, in part, those books were published long ago. There is no information in our records pertaining to the books. Therefore, to the extent David C. Cook Publishing has any rights to those works, we pass those rights to the estate of Mary Ellen Ton.

Hmmm…no records…wasn’t the definitive answer I was looking for when it comes to publishing rights…but what the heck, I can always claim ignorance and beg forgiveness. Let’s rock and roll! Almost a year later, while cleaning out some old files of my mom’s I found a letter from David C. Cook to mom, transferring all rights back to her…heck, I had permission before I even asked (I’m not so much a rebel as I thought).

Mom wrote two books that were published by David C. Cook. While I wanted the rights to both books, I was particularly interested in The Flames Shall Not Consume You since my new Peruvian friend mentioned it specifically. My mother was nearly killed in a tragic fire back in 1980. She suffered burns over 50% of her body and a broken back. The book is the story of her journey through the fire, its aftermath, her wrestling match with God, and ultimately, her transformation.

But now…the manuscript. I could type it all in from a copy of the book. That would only take, like, forEVER. I started Googling transcription services that could help. I found a bunch but I was nervous about using an unknown service. Then it struck me. Why not reach out to my editor Lori Paximadis. She may have a service she recommends. As it turned out, Lori provides that service herself! She bought a copy of both of mom’s books from eBay, ripped the spine off of them, ran them through an OCR scanner to convert them to text files, and then corrected all the OCR misreads.

Once she had the manuscripts in a usable format, she reviewed them and recommended minor changes to bring them to modern editing standards. I reviewed each of her recommendations and accepted most of them. One item got past both of us…and the original editors. It’s like nails on a chalkboard every time I hear it now. To anyone that spots it or hears it, let me know, you will win a fabulous prize!

While Lori was working her magic on the manuscripts, I reached out to my graphics designer, the amazing Jennifer Vogel. Jennifer (or JVo as we call her) and I have been working together now for about four years. PowerPoints, social media, webinars, webcasts, and book covers…she brings my words to life through imagery. There was no one else I would entrust with bringing my mom’s book cover back to life. 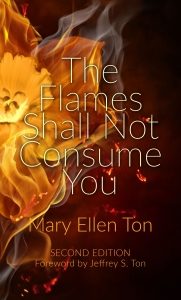 I think you will agree, she did a beautiful job!

Call them serendipitous moments, call them gobsmacked moments, call them just a coincidental moment, or, as my old friend Melva calls them, divine coincidences…the project to publish the second edition of The Flames Shall Not Consume You has been full of such moments. I mean, who can’t see the handiwork of the universe in a young woman from Peru reaching out inquiring about the book?

Another one of those moments occurred just weeks before the publication of the ebook when I received the cover images from JVo. I wrote about this moment in part two of my series A Journey Through the Land of Serendip. Rather than making you click through to read the story, I will share it here…but you SHOULD click through and read the full series after you finish this post!

In the summer of ‘21, Carmen (my wife), Brad (one of my sons), and I traveled to Greenlake, Wisconsin to scatter dad’s ashes in the same place we had spread mom’s back in ‘14. As we spread his ashes, some fell on the surface of the lake. As the waves rolled in, the ashes began to spread. To me, they looked like wisps of smoke. The next morning, I was reviewing the cover designs Jennifer had sent. Her design of flowers, flames, and smoke is a beautiful reimagination of the original cover.

With the book cover in hand (well, not physically in hand, more like with the book cover in cloud), I finalized the ebook version for release on Amazon. My goal was to release the second edition on September 5, 2021 on what would have been mom’s 88th birthday. My dream was to sell enough copies for the book to hit the Amazon Best Seller List, my fantasy was to have it hit number one. I began to publicize the launch to family, friends, acquaintances, Facebook friends, LinkedIn connections, Twitter and Instagram followers, and my newsletter subscribers. My message of “Buy an advance copy, help make my mom a best-selling author” was spread across every channel I could find.

It worked!! The Flames Shall Not Consume You was the number one new release in five different categories…but it was better than that…it hit number one bestseller (not just new releases) in the Survival category!!! NUMBER ONE! Mary Ellen Ton was a best-selling author!! 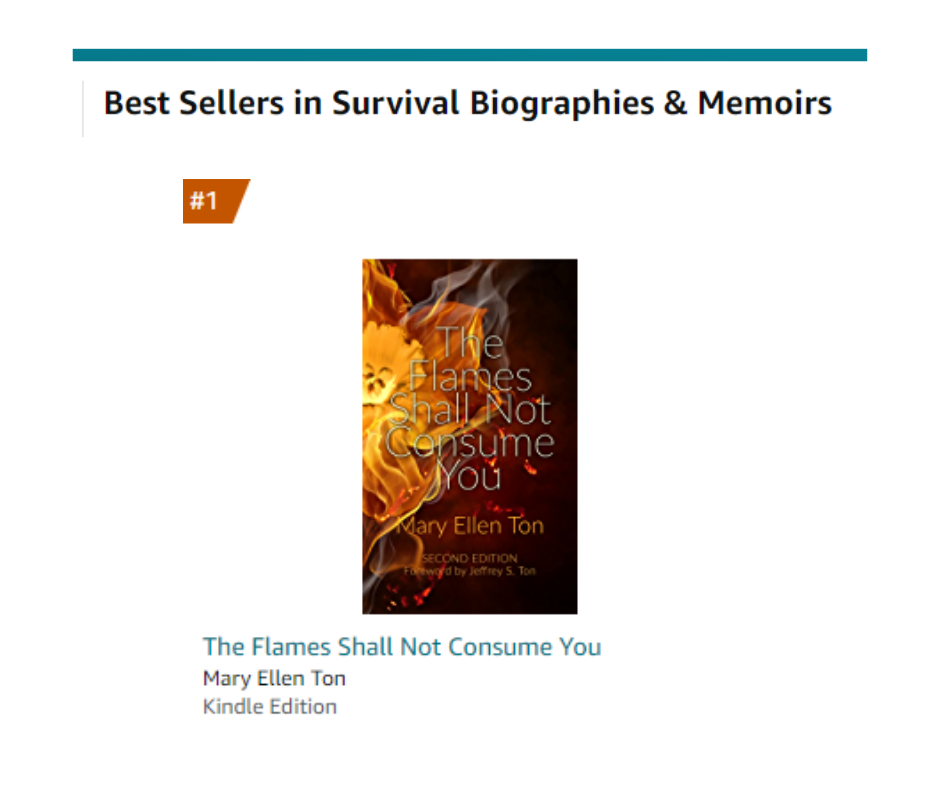 But! The story doesn’t end here! Wait until you hear the story of bringing mom’s words to LIFE. The project to create the audiobook is filled with more of those amazing moments! Until next time…