Linda Ellis, in her beautiful poem “The Dash“, tells the story of a man recounting the life of a friend; emphasizing  the most important part of life is “the dash”, that time between the date of one’s birth and the date of one’s death. Mary Ellen Ton, my mom, was a woman with two dashes.  Let me explain…

Mom was nearly killed in a devastating fire on January 4, 1980. In fact, the doctors at Wishard’s Burn Unit told us in the hours following

the fire that should would not survive her injuries. Burned over almost 75% of her body, the majority being 3rd degree, lungs that suffered smoke and heat damage, and a broken back from her jump from a second floor window, we honestly didn’t know whether to ask God to save her, or to take her.  Countless surgeries later, It would be after Easter before she returned home to begin the incredibly painful physical therapy.

We have often said, the mom who raised us died in the fire on January 4, 1980. The woman that rose from those ashes was not the same woman that raised us. We love them both dearly, and we learned so much from both of them.

Mary Ellen Ton B.F. (before fire) was a beautiful woman. She was a vivacious, energetic 18 year old when she married my dad and embarked on her first two major roles, that of a minister’s wife and a mother. She would be by dad’s side from Milwaukee, Wisconsin, to Parr, Lafayette, Evansville, and finally Indianapolis.  She was a stay-at-home mom, raising four rambunctious kids, while at the same time being the quintessential minister’s wife, teaching Sunday School, hosting dinners, and making sure the four of us were on our best behavior.

As we grew older, mom went back to work as a book keeper, but kept up with mothering and teaching.  She taught my Sunday School class for years (which made it extremely difficult to cut class!). One lesson she based on the song “I Just Want to Celebrate” by Rare Earth. As a teenager, I probably thought it was lame…but I still remember it 40+ years later.

As the decade of the 70’s came to a close, I can remember sitting in our car at the University of Indianapolis where we attended accounting classes together talking about life, religion, family and, yes, even  politics. At the age of 21 or 22, I was just beginning to question the status quo of my faith. Little did we know, sitting in the parking lot on Hanna Avenue, life was about to change…for all of us.

The events of January 4, 1980, as well as her struggles with God through the aftermath are well documented in her book (“The Flames Shall Not Consume You“). What may not be so well documented is the profound effect those events would have on who she was, what she believed and how she lived…and on how we would ALL live.

Her views of and her relationship with God would change dramatically. I would characterize her beliefs (and frankly mine as well) pre-fire like Billy Graham’s and more like John Wesley Spong’s post-fire.

Mary Ellen Ton AF (after fire) , was also a beautiful woman, but in a different way. She would turn that crucible of the fire into a new book, a new career as a speaker, and new found confidence in who she was. Incredibly, just a few short years after being nursed back to health by the “Angels of Wishard”, as she called them, mom joined the staff at Wishard’s Burn Unit as a doctor-patient liaison. Who better to help those critically burned to understand what was happening to them than someone who had literally laid in their bed? She would go on to complete her bachelor’s degree at IUPUI while in her 60’s. She would become a mentor, a muse, and a confidant to all of us (and to many others not in her immediate family). In the 33 years since the fire, she would be a significant part of her five grandson’s lives, see several of them marry and see her family grow with great-grandchildren through marriage as well as the birth of a great-grandson.

In short, you could say, the Mary Ellen Ton most of us know, was born on January 4, 1980. Both Mary Ellen’s will be desperately missed. We will miss our mom, but I will also miss my spiritual guide.

On the Sunday morning after mom’s passing, I attended church with my dad (no, the church did not fall down, nor were there any lightning bolts from the sky), the closing song was “I Am Free”. Written by Jon Egan (Copyright 2004 Vertical Songs), it begins:

I know right now, mom is doing something she has not been able to do for 33 years…she is snapping her fingers, clapping her hands, and, dancing, and singing at the top of her lungs because she is free. 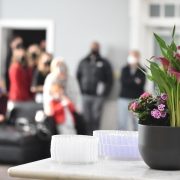 The Flames Burn Brightly – The Launch

The Flames Burn Brightly: The eBook