Last month, as you may recall, I invited you along on a journey: a journey of discovery into some of my family history. I’ve learned a lot in one month..but have a lot more to learn. I’ve exchanged LinkedIn messages with LeRone Branch, the Eagle Scout turned Tax Accountant, who helped develop the memorial to my great-great-grandparents Jan and Aagje (Vander Sijde) Ton. I’ve emailed several times with Paul Ton of Michigan, descended from Jan’s brother, Harmen, and I’ve read two and a half books that mention Jan and others in the Ton family.

Part of what I have learned is that I had some of my facts wrong in my post last month. In that post, I mentioned Jan and Aagje immigrated to the U.S from Holland (Netherlands) in the 1840s with eight of their nine children. That is not correct. As is often the case with old records, it is easy to get confused when children carry the same name as one of their parents. Many times records do not include suffixes such as Jr. or Sr. or even II and III.

My great-great-grandfather, Jan, was 23 years old and single when he immigrated to the U.S. aboard the ship, “Massachusetts of Boston”, sailing from Le Havre, France in April of 1849. Jan was the son of Jan and Peterje (Stam) Ton, my great-great-great-grandparents. THEY had nine children. It was eight of their nine children who, over time, immigrated to the U.S. So, you can see how confusing that can get! The “Massachusetts of Boston” carried two Tons across the Atlantic, Jan and his married sister, Jannetje (Ton) Eenigenburg. Many of the families settled south of Chicago near Lake Calumet. Jan and eight other immigrants are considered the founding fathers of what is now Roseland, Illinois.

It appears from the records I can find there might have been some shenanigans going on onboard the ship. Jan and Aagje’s first son, Jan Jr. was born in February of 1850. Jan and Aagje would marry in 1853 and raise 14 children to adulthood.

I am certain to have many more stories to tell as I learn more, but, I do want to relate a story that directly connects Jan and Aagje to the Under Ground Rail Road. The story is found in the 1923 book “The Wonder of the Dunes” by George A. Brennan. You see, what is now Indiana Dunes National Park was traveled by many freedom seekers on their way from Chicago to Detroit and on into Canada. The Hollanders settlement near Lake Calumet was a leading station along that portion of the underground railroad.

This particular story was retold many times over the years by Cornelius Kuyper, a dear friend of my great-great-grandfather’s and the town constable. Mr. Brennan records the story in his book. In his capacity as the constable, Kuyper was often called upon to assist in capturing run-away freedom seekers. He would attack each request with such zeal and effort, he would receive praise from slave owners and sheriffs alike…though…he never succeeded in capturing any freedom seekers.

A Story to Tell

As Kuyper tells the story, one day he was visited by a slave owner from Kentucky, a sheriff deputy from Chicago, and a posse. They were pursuing three freedom seekers, each with a $3,000 price on their heads. As was his norm, Kuyper searched high and low for the runaways, even taking the posse as far as the Illinois-Indiana state line. Once again, he came up empty-handed.

When they returned to Kuyper’s home, his wife Maartje prepared and served them a meal before they headed back to Chicago. After they were safely on their way, Kuyper headed into his cellar, opened a trap door, and summoned one of the freedom seekers who he had hidden away. He then went to the barn and moved part of an immense stack of hay, the other two freedom seekers emerged. He fed them, had them climb in his wagon covered them with cobs of corn, and took them to the home of Jan Ton. Jan hitched up his wagon, transferred the precious cargo, and headed out toward Indiana. Near the town of Hohman Bridge (today’s Hammond, Indiana), the cargo was transferred to another wagon. The freedom seekers were well on their way to Canada.

One can only imagine the countless times these men and women provided this service to others on their journey!

As I learn more, we will continue on this journey together. Until next time! 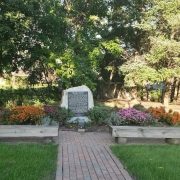 A funny thing happened on the way… 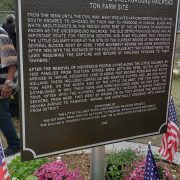 A Journey Through the Land of Serendip