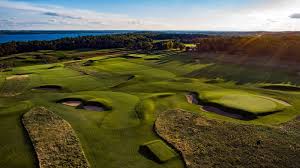 When my son Brad invited me to play golf last week little did I know my dad would be joining us. Yes, I played golf with my dad last week. It was a beautiful fall day, a little crisp when we started the round but warmed up quickly. Now some of you may be thinking, “OK, what’s the big deal?” I had not played golf in over a year. In fact, I’ve probably only played three or four times in seven years since I injured my neck. So, playing golf at all was a big deal. But playing golf with my dad was a really big deal. You see, my dad passed away in December.

I don’t know when I first noticed him. On the second hole, I bladed a 9 iron, the ball shot across the green and into the woods. Brad and I spent the obligatory minute or two searching for it before I took a drop. There he was. I could see the grin on his face. The grin he would always grin when no matter how deep in the woods his ball or mine went he would walk right in and pick it up. As quickly as he appeared, he was gone again.

Teeing off on the fifth hole, I had honors. One of the few times I had honors over Brad. After hitting my tee shot, I stepped out of the tee box and stood near the cart watching Br….dad tee off. The waggle of the clubhead, the shifting of the feet, the glances down the fairway as he lined up his drive, the “well, that will play” comment said half out loud, half under his breath, as his drive went right down the center. It was dad.

It all came back. It all came flooding back. Dad loved golf. He and his buddies would play once or twice a week all spring, summer, and fall. I don’t recall ever playing as a young kid, perhaps we did. I do remember putt-putt golf, but it wasn’t until junior high that I have any recollection of going with him. At first, I was just hanging out as he and his friends played. He’d let me sneak a shot every once in a while. Soon, I could join in for a round. We didn’t play often. Golf wasn’t my thing, baseball was my jam.

As I got older and moved away from home, we would always work in a round at least once a year. Golf at Green Lake, Wisconsin’s Lawsonia became a fixture for summer vacation. The whole family would gather for a week. Neither of my brother’s played golf, so dad and I would steal away and play a round or two. It was a tough course. As the years went by, they added a second course, and it was even tougher. Dad had names for all the holes. The Quarry (duh, it had a sharp dogleg right, if you missed, you would be in the…quarry. The Cliff (a par 3 that had about a forty foot drop down to the green, with little or now fairway. And, of course, The Dolly Parton (probably the most risque thing I ever heard my dad say…it was the Dolly Parton because, well, uh…the two big hills on either side of a narrow fairway).

As the grandkids grew, a highlight of the week was going golfball hunting with Popper in the quarry (you see, I was not the only one who always missed the dogleg). Soon, they were old enough to play themselves. It became a passion for Brad. He and I would play a couple of times a week during his junior high and high school years, and, of course, we would play with my dad, a LOT.

All of this came back as Brad and I played our round. The sounds, the smells, the warmth of the sun…dad was everywhere. It had been years since dad could be out on a golf course. I’ve missed him. But with COVID, starting a new business, publishing a book, I have to say it has been a while since I spent time with him, spent time with the memories. I didn’t know how much I needed those moments until he walked the course with us.