This eulogy was delivered at First Baptist Church on January 11, 2020, and at Hoosier Village Chapel on January 13, 2020, in honor of my daddy, coach, dad, popper, pop, Gene Ton. If you are interested in watching a video of the entire service, you can find it here: L. Eugene Ton. (Note: the first 30 seconds are a black screen with the brass quintet playing. The video then fades in.)

My heart hurts. Our hearts hurt.

Despite the pain, we want to celebrate. Celebrate an amazing life and a truly incredible man.

Before I get to that, I want to let you in on a little secret. Dad wasn’t perfect. I can remember as clear as day. He and I were repairing the gutters on our home in Evansville (you see, someone’s basketball kept crashing into them, must have Joel’s, mine always swished through the hoop). Anyway, there we were, dad up on the ladder and me holding it steady. When it happened. With a mighty swing of the hammer, expecting to hear the metal on metal clang of the hammer, I heard instead, metal on thumb. Yes, that might blow smashed his thumb. Time seemed to slow down. I could see it building up. His face growing red. I thought, here it is, I am finally going to hear my dad say “damn”…or worse. His face now covered in a grimace. Here it came…”fffffffiddlesticks!” Yep, Fiddlesticks. That was our dad.

I am sure all the family could regale you with other stories of dad, probably some that actually show some imperfections. He truly was special. We are so happy to celebrate him with you. We shared him with all of you for most of his life. I’d like to do something a bit unusual. I always loved it when dad would do something unusual in his sermons. One of the things he did that always caught my attention, was when he would come out from behind the pulpit and step down to be with the congregation. Sometimes he would become a character in his sermon: Peter; James; Paul. Other times he would just talk with us. I’ll tell you, for a junior and senior high kid, it really made me sit up and pay attention. Heck, it made the whole congregation sit up and pay attention to what he was saying.

No, I’m not going to be one of the disciples today, THAT would be a bit of a stretch. But, I am going to involve all of you for a moment.

In honor of dad, I’d like you to stand if dad officiated your wedding (some of us had the honor of him doing that for us more than once). Now, stay standing.

If dad officiated one of your children’s weddings, please stand.

How about baptism? If he baptized you, please stand.

Please stand if he officiated a funeral for a loved one or family member.

How many here were the benefit of his wise counsel over the years, you don’t have to tell us why, your secret is safe. Please stand.

How many here felt the warmth of his smile, the comfort of his greeting, the guidance of his leadership?

If you are not standing by now, please stand. Please join me in thanking him, by repeating after me. “Well done, good and faithful servant. Enter into the joy of your Lord”. {repeat}

Thank you, you can be seated.

For me, first, there was daddy, playing in the yards of the parsonages in Lafayette and Lebanon. Pushing me in the swing. Teaching me to ride a bike without training wheels in the alley. Building Pinewood Derby cars for the annual Cub Scout tradition. His annual tradition for Memorial Day: take his small transistor radio out to the garage, tune in the Indy 500 and wash and wax his car. It was an exciting day when I finally got to help! We learned quickly that daddy was different than most. Daddy was Reverend Ton, unlike most kids not only did we live next door to his “office”, but we went there multiple times a week. People treated him differently, people treated us differently. What I remember most about daddy was his smile.

Next came Coach…Little League Baseball…Flag football, teaching me to shoot a layup on the goal behind the garage. He was there with patience and gentle coaching (sometimes not so gentle coaching). This is where dementia may have been a bit of a blessing. To hear him tell it today, I was an all-star catcher in Little League. Uh, dad, You coached the all-star team because our team won first place. I said the Little League pledge for the Allstar game because I wasn’t didn’t make the team. How he became my Little League coach is a microcosm of the type of man he was, the type of father he was. After watching a couple of my team’s practices and observing the way the coach treated us; yelling, screaming, cursing. Dad tried to coach the coach on a better approach. Professionally, not in front of the kids, in private. The guy quit. Rather than going to the league to find another coach, dad stepped up and became a coach. What I remember most about the coach was his patience.

By the time we were in Evansville he was just “dad”. Evansville was much bigger than Lebanon. Dad was learning how to lead an urban church, and I was learning about high school. Dad was still “Reverend Ton”…I can remember my mom and dad giving a tour of the parsonage to a group of “old ladies” from the church (they were probably 60!). As they passed my brother’s room, she remarked, “Oh and this must be Reverend Ton’s room.” Uh, no! He slept down the hall with my mother. There were four of us for Pete’s sake, as far as I know, there has only been one immaculate conception. Despite the fact that he was Reverend Ton to most, to me he was dad. He was the guy I could go to for anything. He was the guy that would do anything for us. During this time, he taught me the game of golf. Dad loved golf. Of all the sports, golf was king. At first, I got to tag along with the foursome, take a few swings here and there. Later, just the two of us would go. Inevitably, they would pair us up with another twosome. I noticed dad always introduced himself as “Gene”. Not Reverend Ton. When I asked him about it, his answer was simple, “if I introduce myself as Reverend, they will act differently because I am a pastor. They may not enjoy themselves as much, so here I am “just Gene”. When I was a freshman in college, and homesick…it was him I called. It was him who provided the reassurance I needed to hear, not only in his words but in the sound of his voice through the phone. What I remember most about dad was his quiet leadership.

Along about 1978, he became grandpa…Popper as my kids and my sister’s kids called him. Dad would have been in his late 50’s and into his 60’s. The great Reverend Doctor, the leader of leaders, the pastor of pastors became putty in the hands of those little creatures. He would laugh, and joke and smile ear to ear. Popper loved Christmas, he and Mimi both did. But if Mimi was the queen of Christmas, dad was the king of Easter. He would spend hours hiding eggs in the yard. So many eggs, he had to have a map in case the five grandkids couldn’t find them all. And, then. And then, there was the Easter play. A silly little play about Captain Dan the Fried Egg Man. We all had a role. Even the littlest ones could do sound effects. But it was popper, it was dad, who took it up a notch. Creating costumes for his characters, using different funny voices as he played different roles. He may not have been a hit on Broadway, but he was a hit with the little ones! What I remember most about Popper was his humor.

The last few years, he became “Pop”. I’m not sure if that was a shortened version of “Popper”, the name the grandkids call him, or sign of the change in our relationship. The parent became the child, and the child became the parent. It has been an honor to be on this journey with him, whether we were going toe-to-toe: “Quit treating me like a child!” “You quit acting like one!” Gee, where have I heard THAT before; or taking in an Indians game, telling the same stories, laughing at the same jokes game after game, year after year; or sitting quietly in his room at Hoosier Village just “being”. A few years ago, when I was contemplating a career move, the decision to leave Goodwill, a job I loved, a mission I loved and people I loved…I went to Pop. You see, he was still in there. I went to him for guidance. He asked questions, he told stories, he answered my questions about his own career and the choices he had made to leave one church for another or to leave the pulpit and take an executive minister role for the denomination.  True to form…he never gave me the answer. What I remember most about pop was his wisdom.

We have all experienced dad in different ways…but always the same: funny, caring, compassionate, empathetic, and loving…pastoral…ministering us all…even at the end.

Join me once again. “Well done good and faithful servant. Enter into the joy of your Lord”. {repeat}

Well done good and faithful father. Enter into the joy of your Lord.

Wow, are those smiles identical, or what?!

Should I Stay or Should I Go?

Breaking Up is Hard to Do!

The Soundtrack of Our Lives 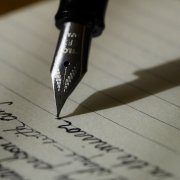 Love is Thicker than Blood
2 replies